As the couples pour into the stadium in their thousands – the “bridegrooms in identical blue suits, the brides in lace-and-satin gowns” – , ‘Rodge’ and his wife Maureen, armed with a pair of binoculars, scan the crowd from their seats in the grandstand in the hope of catching a glimpse of their daughter Karen. With her soon-to-be husband Kim Jo Pak, she forms one of the 6,500 couples to be married in a mass ceremony at Yankee Stadium in the Bronx conducted by the reverend Sun Myung Moon, the founder of the Unification Church. As he struggles to catch sight of his daughter, Rodge also struggles to make sense of the event, unsure even as to what to call this gathering – “the mass, the crowd, the movement, the membership, the flock, the following”. He himself sits among a crowd, the crowd of spectators, thousands of people who are there to watch the event, but also to photograph it. Whatever ‘it’ may be, Rodge knows only that the repetition of this “time-honored event” has created “something new”.

Crowds and images form an important part of Don DeLillo’s 1991 novel Mao II, and the photograph chosen to introduce the novel’s opening chapter “At Yankee Stadium”– pictured below and credited to UPI/Bettmann – could hardly have been better. It seems to be a perfect evocation of such an event: a mass event given the numbers of people involved and shown in the picture, but also an endlessly repeated event, like a photograph, perhaps, since the actual blessing is repeated thousands of times. The picture’s strength also rests on the fact that the couples in the foreground face away from us, remaining faceless, unidentified and unidentifiable, part of the group, while the couples facing us from further off, on the other hand, are sufficiently distant and depersonalized as to fade into the crowd. The columns of couples seem to extend indefinitely, while the wall of spectators at the back seems both to participate in and contain the event while also being hypnotized by it, in a sense. Like the event itself, there is something both fascinating and scary about the photograph, making it an excellent choice for the text. Indeed, it suits the text so well that I had always assumed that it was a photograph of the ceremony at Yankee Stadium.

This assumption was brought into doubt, however, when I recently came across an issue of Granta magazine (issue 34, dating from autumn 1990) which features this very opening chapter of Mao II. Indeed, I was surprised to see it featured a different photograph (pictured below, apparently uncredited). This ‘new’ picture (picture B, say) immediately struck me as substantially weaker than the one reproduced in the novel (picture A, then). First off, picture B is set indoors under a relatively low ceiling with artificial light. Contrast that with the sense of movement or perhaps momentum and space collected in the very opening line of the chapter – “Here they come, marching into American sunlight” –, a sense that seems to come through in picture A. What’s more, there are far too few people of course in picture B and far too much detail for it to be in any way evocative of the mass of people the text evokes. The proximity of the people in picture B raises too many questions: Why is the woman in the centre grinning? What moved her future husband to look at her? Is that his crutch next to him or does it belong to the woman standing to his right? And so on. The picture is too intimate, too individual for a sense of depersonalized anonymity to emerge: these individuals haven’t (yet) been absorbed by the masses. Also, contrary to picture A, there is no room for Rodge and Maureen in picture B: one assumes that neither of them would need a pair of binoculars to go over this small gathering. 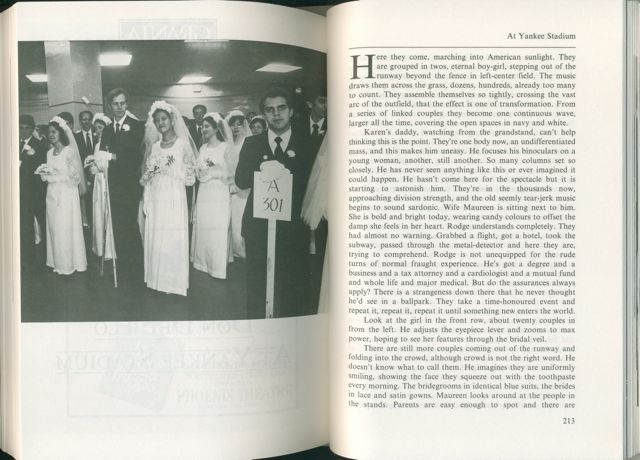 So, since the ‘new’ photograph didn’t seem to match the text as well as the ‘old’ photograph, I decided to  reread the chapter to see how well picture A actually matches the text. I was struck first of all by the slight discrepancies between the two, first of all by the claim that all the bridegrooms were dressed in “identical blue suits”, which jarred with my (mental) image of this (black-and-white) picture: I can’t ‘see’ these blue suits. A more blatant (and more verifiable) discrepancy between the two concerns the claim that when Karen passes beneath Moon’s pulpit, it is said to be “rimmed on three sides by bulletproof panels”. There is no sign of these in the photograph, on the contrary: it appears rather to be open on three sides. And then, of course, it hit me: Who ever said this was an actual photograph of the said event at Yankee Stadium? And more than that, who ever said a mass wedding ever took place at Yankee Stadium? Mao II is, after all, fiction, a novel. So I searched for information on a mass Moon wedding at the stadium in the late 1980s but found nothing. According to this 1997 article on Moon in the Washington Post, a mass blessing involving 2,075 couples was held in Madison Square Garden in 1982, but no other similar event seems to have been held in the US in the 1980s. I then read this 1991 interview with Vince Passaro in the New York Times, in which DeLillo claims that he was notably inspired by “a photograph of a wedding conducted by Reverend Moon of the Unification Church . . . a wedding in Seoul in a soft-drink warehouse, about 13,000 people”. So there you have it, the magic of fiction, at work once again: the reimagining of a real event, made all the more real thanks to DeLillo’s use of a photograph. What these photographs are of is still a mystery to me: Perhaps picture A is of the wedding in Seoul and picture B of the event in Madison Square Garden? I don’t know, but if you have any ideas, I’d be happy to hear them.