The Brontës in Brussels

If asked, I would of course have claimed that I knew – naturally! – that the Brontë sisters had spent some time in Brussels at some point in their lives. But if truth be told, I wouldn’t have been able to say much more, if even that. So I was glad to discover the website of the Brussels Brontë Group, formed by Brontë Society members and gathering anyone interested in the work and life of the Brontë sisters.

It is on the group’s website that I discovered that Charlotte and Emily Brontë stayed at the Pensionnat Heger in the Quartier d’Isabelle next to the Royal Palace in 1842-43, and that it is their stay in Brussels which inspired both The Professor (published posthumously in 1857) and Villette (published in 1853). As can be seen from the overlapping maps below (and which I borrowed from the website of the Brussels Brontë Group), there is not a trace left of the school. In its stead stands the Bozar Centre for Fine Arts, which was completed in 1928. 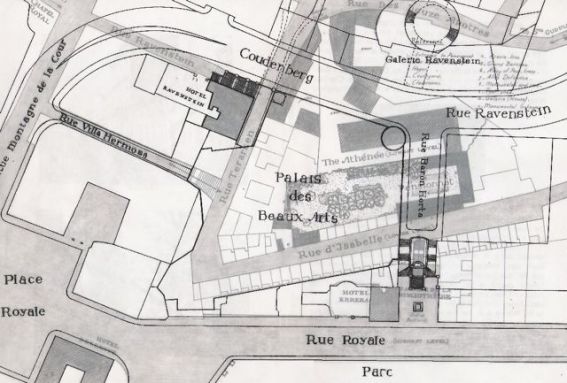 The group’s website contains more useful information on the sisters, their stay in Brussels and the novels. It also contains a number of interesting pictures of the school and its surroundings.