The only curious thing about Mark Haddon’s The Curious Incident of the Dog in the Night-Time is that it actually was a critical and popular success when it was published in 2003, selling millions of copies and winning a number of awards, not least the Whitbread Book of the Year award.

The only reason I mention it is because the novel contains a photograph (pictured below right), a reproduction of the first of the five photographs of the Cottingley Fairies. The photograph is included in a passage in which the adolescent hero of the novel evokes his dislike of Arthur Conan Doyle, who did believe in fairies. Why Haddon felt compelled to include this single photograph in his novel will remain a mystery to me.

The picture below right is taken from the 2004 Vintage Contemporaries edition of the novel, which is pictured below left. 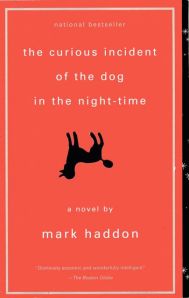